Singlet fission is a promising approach to photovoltaics where one pair of singlet charge carriers is converted intto two pairs of triplet charge carriers. Molecules undergoing singlet fission require a specific energetic condition: the first triplet state has to be half the energy of the first singlet state. In a study, lead by Max Pinheiro from Sao Paulo, Brazil, we investigated how this energetic condition can be achieved by substituting a tetracene molecule with B and N atoms in different positions. The resulting paper A systematic analysis of excitonic properties to seek optimal singlet fission: the BN-substitution patterns intetracene, which just appearred in J. Mat. Chem. C, shows the versatility of this approach in tuning the energies across a wide range. The results are rationalised by measuring unpaired electrons and compared to a more qualitative discussion in terms of bonding patterns and Clar sextets. We hope that the study will help by setting new accents in terms of design ideas for new chromophores.

The molecular orbital (MO) picture has become the standard tool used by chemists to understand molecular electronic structure and particularly excited states. In our newest paper Toward an understanding of electronic excitation energies beyond the molecular orbital picture, which just appeared as a Perspective in PCCP, we asked whether we can go beyond the MO picture in a systematic way in our understanding of excited states. This endeavour ended up more involved than initially expected but we hope that it presents some interesting physics in a memorable and sufficiently intuitive way.

Below, we exemplify the tools developed to study a donor-acceptor-donor system initially developed in JACS, 2014, 136, 18070 and revisited in PCCP, 2019, 21, 10580. The HOMO of this system is on the carbazole donor whereas the LUMO is on the anthraquinone acceptor. The lowest excited state of the system (in gas phase) is not reached via the HOMO-LUMO transition but it is a locally excited state on anthraquinone. Why?

The contributions affecting the energy of the first excited singlet state are shown in Figure 1, above. In the third row the natural transition orbitals (NTOs) are shown. These give rise to the density of the excitation hole (red) and the excited electron (blue), shown above. The Coulomb attraction between these two charge distributions now stabilises the excited state. This Coulomb attraction is represented by the electrostatic potentials (ESPs) induced by the charge distributions. The important observation is that these ESPs are non-uniform with stronger contributions in the centre. Thus, the locally excited state is stabilised and an energetic penalty is paid for charge transfer. At the bottom of Figure 1, the transition density is shown, which leads to a repulsive exchange interaction destabilising local singlet states. In the present case the Coulomb attraction dominates and the lowest state is fairly local in nature.

The paper TheoDORE: A toolbox for a detailed and automated analysis of electronic excited state computations just appeared in the Journal of Chemical Physics in a special issue on Electronic Structure Software. Please, take a look if you are interested in speeding up the analysis of your excited-state computations. If you are already a user of TheoDORE, you can learn about the latest developments and obtain a compact overview of the underlying theory.

Splitting N2 is a challenging undertaking due to the strong triple bond holding the two nitrogen atoms together. Traditionally, this task is achieved via the Haber-Bosch process but recently interest has shifted to the possibilities of nitrogen splitting via homogeneous catalysis. Computations on the dinuclear transition metal complexes involved can be performed thanks to modern computational hardware and appropriate computer codes. However, the analysis of the excited states involved can become a significant challenge due to the large number of states and difficulties in assigning their character unambiguously. To tackle this problem, we have recently devised a strategy for a detailed analysis of the electronic wavefunctions of the states contributing to the reactive process. The associated paper, led by S. Rupp and V. Krewald from TU Darmstadt, just appeared in the European Journal of Inorganic Chemistry: Multi‐tier electronic structure analysis of Sita’s Mo and W complexes capable of thermal or photochemical N2 splitting.

You can find the new paper describing the OpenMolcas package in JCTC – OpenMolcas: From source code to insight. OpenMolcas represents the open-source release of the previously commercially distributed Molcas package. Use OpenMolcas to gain access to powerful multireference methods for free and to have full control if you need to modify the source.

My own contributions to Molcas are concerned with the implementation of the wavefunction analysis module &WFA , as described in JCTC 13, 5343 (2017), and the interface to Columbus. Let me know if you have any questions about these.

Our paper “Strong Influence of Decoherence Corrections and Momentum Rescaling in Surface Hopping Dynamics of Transition Metal Complexes” was just accepted in JCTC. In this work we investigated the reliability of the surface hopping method in the case of a transition metal complex described using a linear vibronic coupling model. We found that various seemingly unimportant parameters can have a strong influence on the results.

END_OF_DOCUMENT_TOKEN_TO_BE_REPLACED

Our new paper Effect of Symmetric and Asymmetric Substitution on the Optoelectronic Properties of 9,10-Dicyanoanthracene, written in collaboration with colleagues from Imperial College London, TU Vienna, University of Geneva, and the Polish Academy of Sciences just appeared in the new RSC journal Molecular Systems Design & Engineering. The paper illustrates design principles relevant for strong two-photon absorbers. The best two-photon absorption is obtained by using a symmetric D-A-D arrangement with sufficiently strong donors.

END_OF_DOCUMENT_TOKEN_TO_BE_REPLACED

The challenge about running photodynamics simulations is that the computational cost is often so high that one might have to compromise in terms of the electronic structure method used. One is tempted to just check the vertical excitations at one geometry and run the dynamics if those look alright. How this can go wrong is investigated in the paper “The Influence of the Electronic Structure Method on Intersystem Crossing Dynamics. The Case of Thioformaldehyde” that just appeared in JCTC. Take a look if you are interested. 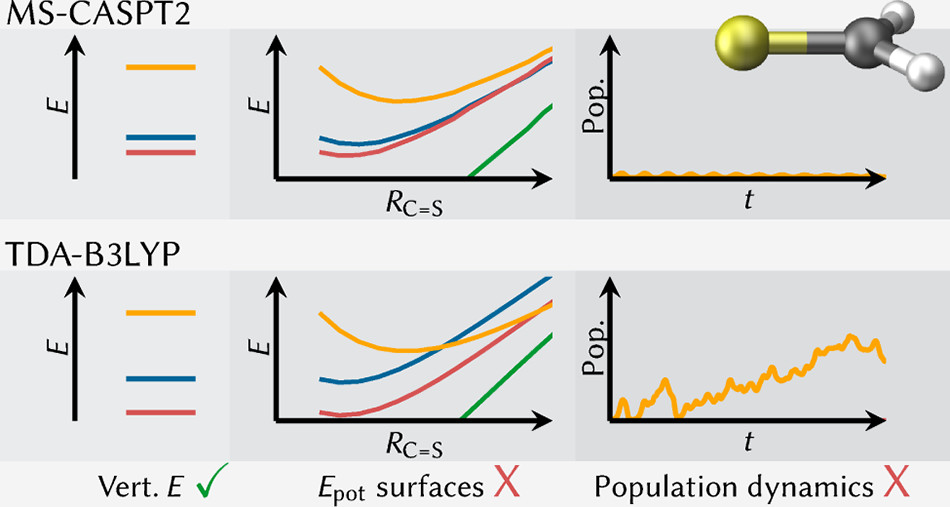 END_OF_DOCUMENT_TOKEN_TO_BE_REPLACED

Small modifications can make a big difference. Swapping anthraquinone for a thiophene based acceptor in a donor-acceptor-donor system produces the desired red shift in the emission but limits its quantum efficiency. This conclusion was drawn from a recent paper lead by Stephanie Montanaro and Iain Wright at Loughborough: Red-shifted delayed fluorescence at the expense of photoluminescence quantum efficiency – an intramolecular charge-transfer molecule based on a benzodithiophene-4,8-dione acceptor which just a appeared in PCCP.

Computations reveal that the reason for the reduced emission quantum efficiency lies in the presence of low-lying locally excited states (4 triplets and one singlet) on the central unit.

Felix’s first purely Loughborough grown paper just appeared as a Communication in ChemPhotoChem: “Visualisation of Electronic Excited‐State Correlation in Real Space“. The paper explores a new method for visualising electron correlation exemplified in the case excited states represented in the electron/hole picture. The idea is to fix the hole on one fragment of the system and to observe how the excited electron adjusts to this position.

Below, I am showing this analysis for the lowest 10 excited states of the system. The hole (shown in red) is always located on the second thiophene unit from the right. The electron (shown in blue) adjusts in different ways to this hole position, either moving toward it or going away from it.

As shown above, the method offers a new and intuitive way of viewing correlated exciton wavefunctions. It was also shown in this paper how the method allows to naturally distinguish between ionic and covalent states of naphthalene without any explicit reference to valence bond theory.